FIFA Laws of the Game

1. FIFA Laws of the game, Alberta 8v8 rules and Alberta 7v7 rules apply, except as modified by tournament rules.

2. All teams can consist of a maximum of 20 players, unless permission is given by the tournament. Should you play an ineligible player, your team will automatically default.

*Teams that wish to play in a higher age group or tier than currently registered must first register in their current age group and tier, and then email tournament organizers to discuss tournament placement – email Casey at [email protected]
**No team will be allowed to register in a lower age group or tier, at special request you may be allowed to play up an age group but in a lower tier
** Tournament organizers reserve the right to adjust tiers and age groups as needed to provide balanced pools or ensure teams are competitively balanced. Sometimes this may result in combining tiers or ages to create the pools for the tournament

4. Players are only permitted to play on one team for the tournament

6. All teams will be required to submit an official provincial team roster at least 2 weeks prior to the tournament. Out of province teams will also need to submit a copy of their travel permit.

8. Tournament games will be played on a round robin format in each group if possible. Points awarded as follows: 3 points for a win, 1 point for a tie, 0 points for a loss, no bonus points for a 0-0 tie. The winner of each group will be the team with the most points. You will be able to find the specific format for your pool on the website.

10. In the event that two or more teams have the same number of points at the end of round robin play, the following procedure is used to determine a winner:

12. Coaches are not to enter the field of play unless invited by an official. Coaches should only be coaching within their half of the field and within a few a yards of their technical area.

13. Substitutions shall be allowed at a stoppage in the game at the referee’s discretion. Coaches must have substitutes ready at the centerline of the field before requesting a substitution, 3 substitutes only per stoppage for U11 and up, U9 teams are allowed to substitute unlimited players at the referees discretion. Players leaving the field of play should leave at the nearest boundary line. Players must wait to enter the field of play until exiting players have left the field.

14. If there is a conflict in jersey color with the other team the home team is required to change their jersey.

15. If there is a conflict with either of the teams and the referees jersey colors the teams must provide a pinnie or suitable alternate referee jersey.

16. The home team is to provide 2 game ready balls.

17. Each team must provide 1 person to assist the referee as a linesman.

18. All teams must arrive at the field 20 minutes prior to the start of the game and the game clock must start on time. Any team that cannot field 5 players for U9 and U12 and 7 players for U14 and above at 5 minutes in to game time will default the game (score = 3-0). If the game is defaulted players and coaches may use the field for the duration of the time but referees are not to stay on field. Games shall end no later than 5 minutes before the next scheduled game on that field. The tournament organizers reserve the right to shorten game times if needed.

19. Any team that fails to complete a match or leaves a match without having been directed to do so by the referee or tournament official shall forfeit the match.

21. All referees are ASA certified or equivalent and are assigned by the tournament. Their decisions on their interpretations of the Laws of the Game are final.

22. In the event that a player receives a red card, they will be suspended for the balance of the game and one additional game at minimum. The exception to this is DOGSO. Two Yellow cards to a player in the same game will result in the player being suspended for the following game. Any team receiving three red cards may be suspended from the tournament at the discretion of the Tournament Discipline Committee. All cautions and ejections may be reported to the team’s home association and Alberta Soccer Association.

23. If a team is protesting a player’s eligibility, the game must be played in its entirety first. The team then has thirty minutes after the game to lodge its protest in writing at the tournament trailer at Monklands Fields. No other protests will be accepted. Field Marshals DO NOT HAVE THE RESPONSIBILITY TO ENTERTAIN PROTESTS. If the protest is upheld, the team will be awarded the game by a 3 to 0 margin.

24. PLEASE NOTE: FOUL OR ABUSIVE LANGUAGE TOWARDS REFEREES, PLAYERS, COACHES AND TOURNAMENT STAFF WILL NOT BE TOLERATED. Failure to comply may result in expulsion from the tournament. The team is responsible for the behavior of its players, coaches and spectators. Any coach receiving a dismissal may be suspended from the tournament at the discretion of the Discipline Committee. All cautions and ejections may be reported to the team’s home association and Alberta Soccer Association.

25. Coaches/managers suspended by ASA/ADSA/EMSA/CMSA and/or any other cooperating associations are not allowed in the tournament as a team official. The team is welcome to participate.

26. Tournament Organizers reserve the right to move teams within pools.

27. There will be a sports photographer at the tournament and any pictures taken may be used as promotional material for the tournament.

Procedure Before kicks from the penalty mark start

During kicks from the penalty mark

Subject to the conditions explained below, both teams take five kicks

Substitutions and send offs during kicks from the penalty mark 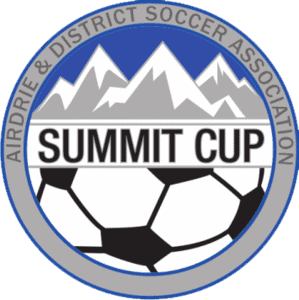